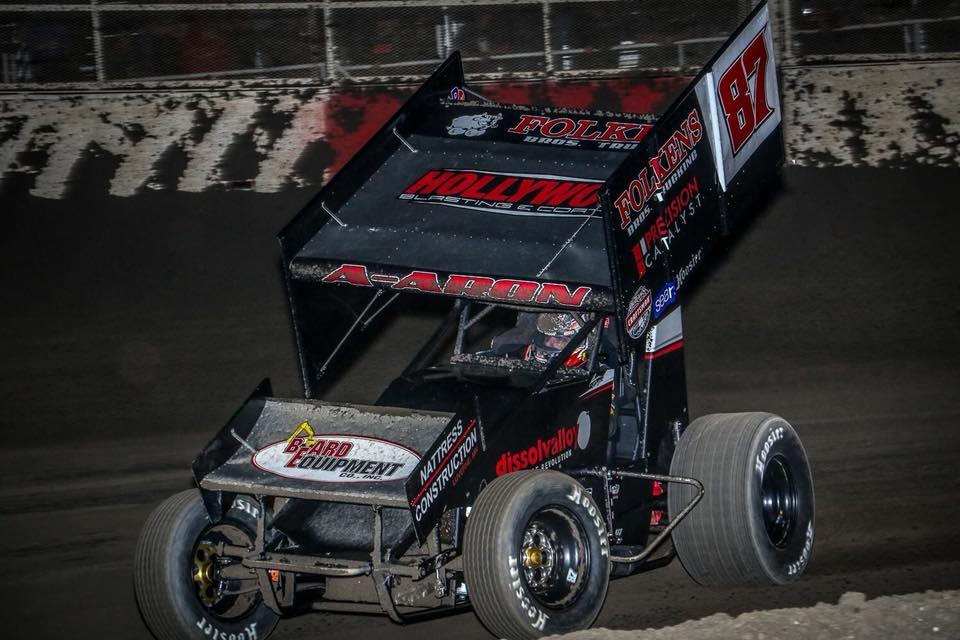 Lonnie Wheatley, CLUTE, Texas (June 14, 2018) – Nine consecutive nights of racing at eight different tracks throughout Ohio is on tap for Aaron Reutzel and the Baughman-Reutzel Motorsports No. 87 Sprint Car team.

The 36th Annual All Star Circuit of Champions Ohio Sprint Speedweek fires off Friday night at Attica Raceway Park before circumnavigating the Buckeye State over the following eight nights.

While current All Star points leader Reutzel is familiar with Speedweek events with last year’s ASCS Speedweek title to his credit, a Speedweek consisting of nine nights is a different animal.

“It will be a lot different,” Reutzel says. “The only thing about this that will be easier is that the tracks are a lot closer together for the most part so there isn’t as much travel from track to track.”

Reutzel and the Folkens Brothers Trucking/Dissolvalloy Downhole Revolution Triple-X Sprint Car team are prepared for the grind that is about to begin.

“We have all our stuff in order, we have a lot of spares ready to go just in case,” Reutzel says.

Reutzel enters the nine-race stretch with a 32-point advantage in the All Star Circuit of Champions title chase after posting a pair of fourth-place finishes in last weekend’s Empire State triple.

“It wasn’t the best of weekends for us,” Reutzel says. “We gave up a few points, but at least we still came out with the lead and had a couple of decent finishes.”

“We just missed the top two in qualifying then ran third in the heat, so that put us starting ninth in the feature,” Reutzel recalls. “We missed it in the feature, we just weren’t that good. I got to fourth because people broke and wrecked in front of us.”

The Nattress Construction/Momentum Racing Suspensions team moved on to Busti’s Stateline Speedway on Saturday night where Reutzel finished out the night in 17th.

“Tony (Stewart) got by in the feature and he was sliding himself, I tried the sliding myself line and hit a rut and spun it,” Reutzel says. “I had to go to the back and it was such a small track that it was hard to pass so we pretty much just stayed in line.”

Reutzel finished out the weekend on Sunday night at Weedsport Speedway by carrying a damaged Sprint Car to a fourth-place finish.

“The track was falling off quick in qualifying, and we were the last car in our group and managed to time in third,” Reutzel relates. “We were second in the heat and then second in the Dash, but we weren’t that great in either race.”

Gridding the feature fourth, Reutzel was damaged before the opening lap was in the books.

“The polesitter spun getting into one and got into my left rear,” Reutzel says. “I slid into the wall and knocked the Jacobs ladder off. I decided to stay out and see if it would work.”

Reutzel managed to hold down second much of the way before finishing out the night in fourth.

“It was a handful, but I was still able to hold second most of the race,” Reutzel says. “I couldn’t stay with Carson (Macedo) though, then the bottom came in late and (Paul) McMahan and (Danny) Dietrich got by. I just didn’t chase the track to the bottom soon enough.”

With New York in the rearview mirror, nine Ohio nights await Reutzel and the BRM No. 87 Sprint Car team.

Up Next: All Star Circuit of Champions Ohio Sprint Speedweek