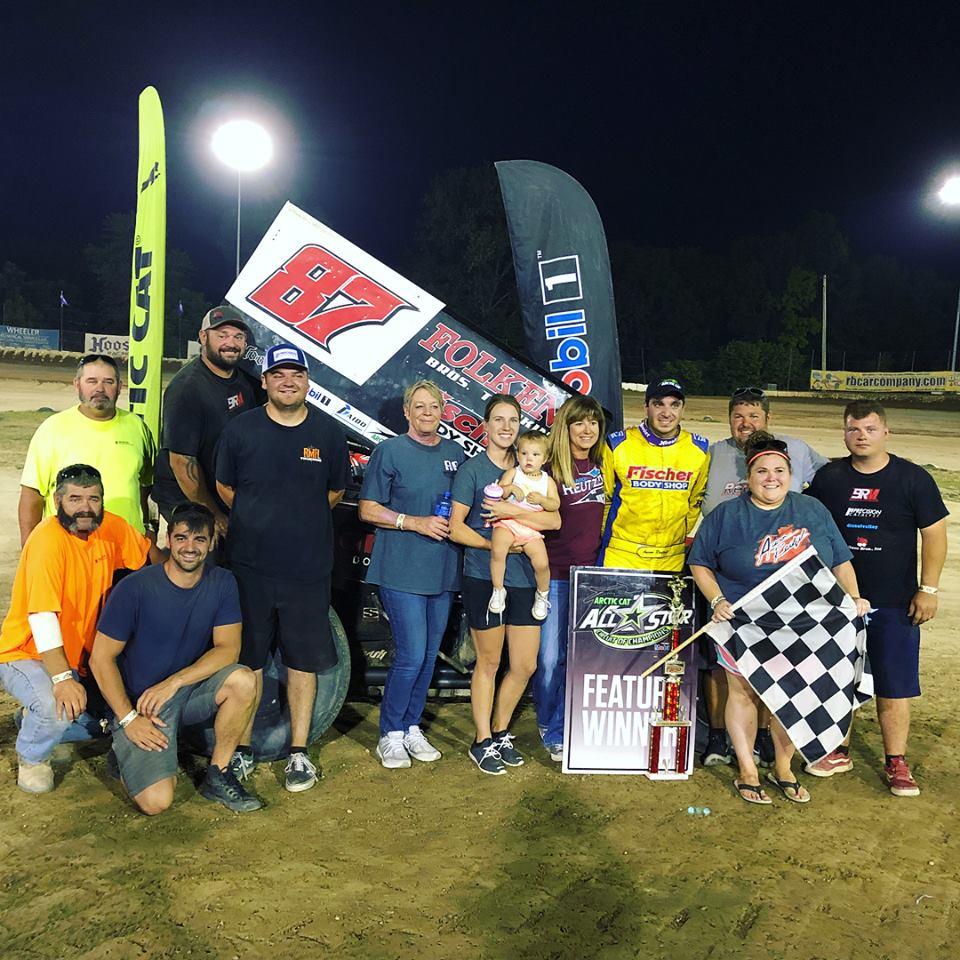 Lonnie Wheatley, CLUTE, Texas (July 3, 2018) – Aaron Reutzel continued his pursuit of the 2018 All Star Circuit of Champions title by sweeping the weekend’s pair of events in Indiana and Illinois aboard the Baughman-Reutzel Motorsports No. 87 Sprint Car.

Reutzel bested the All Stars at Indiana’s Plymouth Speedway on Friday night and then Illinois’ Dirt Oval at Route 66 on Saturday night to run his overall season win total to six and closed to within eight points of the series points lead.

“It was a really good weekend for us,” Reutzel exclaimed. “We made up some points but those other guys were right there too. There’s a lot of season left, we just have to keep putting together good nights.”

Reutzel will try to add some additional wins this week with three nights of Pennsylvania Speedweek action from Tuesday through Thursday and then another round of All Star competition on Saturday night.

Last weekend’s All Star double began at Indiana’s Plymouth Speedway where Reutzel had contended for a previous World of Outlaws win. “We had been there once with the World of Outlaws and felt like we had a car capable of winning,” Reutzel recalls. “We were good again.”

After timing in second quick overall on the night, the Folkens Brothers Trucking/Dissolvalloy Downhole Revolution Triple-X Sprint Car team tested through heat and dash action to get dialed in for the feature.

“We tested in the heat and weren’t very good,” Reutzel explains. “We did something different for the Dash and it was really good.”

It was good enough that Reutzel won the Dash to earn the pole position for the feature and then proceeded to lead all 41 laps aboard the Precision Catalyst/Hollywood Blasting & Coating/Beard Equipment entry to pocket the $5,000 winner’s share.

“We were able to get the jump at the start and cruised around from there,” Reutzel says.

The 41-lap victory had special meaning for Reutzel after the passing of Jason Johnson the previous weekend.

“This is a special win for me and my team. To win a 41-lap race in honor of Jason Johnson is very special, and really emotional,” Reutzel says. “I’ve known Jason a long time. I watched him race a lot in the area where I am from, and when I started to build a race team, he helped me out a lot.”

Action shifted to Joliet, Illinois’ Dirt Oval at Route 66 on Saturday night. While there were early issues in the night, the outcome proved to be the same with Reutzel and the Nattress Construction/Momentum Racing Suspensions crew standing in victory lane once again.

“We went out really late in qualifying and the track had slowed down a lot,” Reutzel explains. “I came in and we had a hole in the oil tank, I bottomed out really hard one lap so that’s probably what caused it.”

The BRM team responded with a quick engine change and Reutzel raced to a second place finish in his heat race to earn a Dash position in which he finished second to land the fourth starting position in the feature.

And Reutzel had found something about the Joliet oval that seemed like home.

“It was a fairly big track and almost identical to what Houston Raceway Park used to be,” Reutzel said in reference to a track that he turned many laps upon in his early ASCS Regional days. “We threw some stuff at it that we used at HRP and we were able to get a good hold on the track.”

Reutzel needed just seven laps in the feature to reel in early leader Jac Haudenschild and then raced on to his fifth All Star Circuit of Champions win of the year.

“We rolled around for a while, the track was kind of abrasive on tires so we just wanted to take it easy,” Reutzel says. “Once we got to the lead, I was taking it easy until I got to traffic and then I would go pretty hard. We only had maybe three laps or so in traffic each time and then a caution would come out and we could roll around easy again for a while.”

It was an ideal end to a perfect weekend for the Clute, TX, native.

“It was one of those nights were everything just fell right,” Reutzel wraps up.

Reutzel and the BRM No. 87 team will take a hot hand into Pennsylvania Speedweek action beginning at Bechtelsville’s Grandview Speedway on Tuesday night before moving on to Port Royal Speedway on Wednesday and then Maryland’s Hagerstown Speedway on Thursday night. Grandview and Hagerstown will both be new venues for Reutzel.

Reutzel will finish out this week’s racing action with another round of All Star Circuit of Champions competition at Hartford, Ohio’s Sharon Speedway on Saturday. Reutzel bested the All Stars at Sharon on May 5.

For those unable to catch the action in person, all four of these events are available via PPV at https://www.speedshifttv.com/. 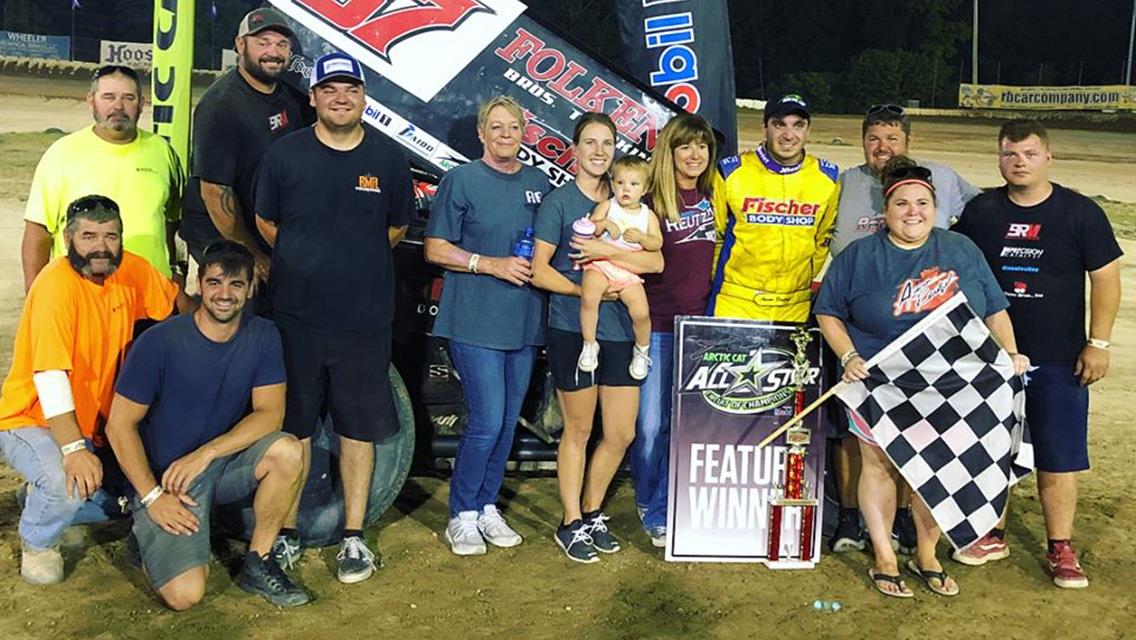 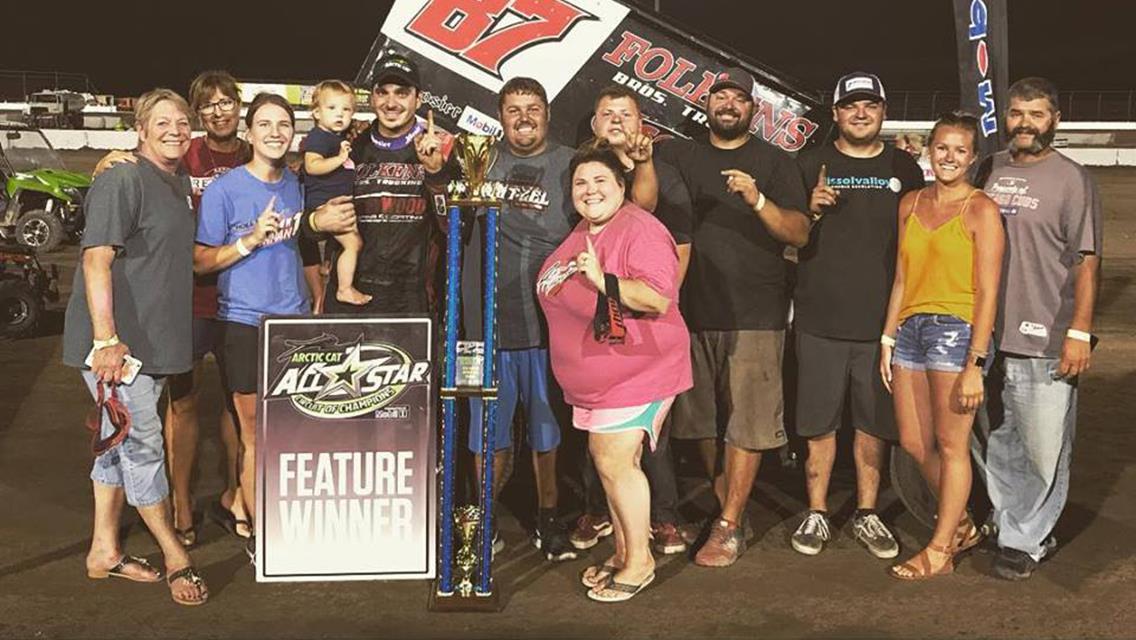