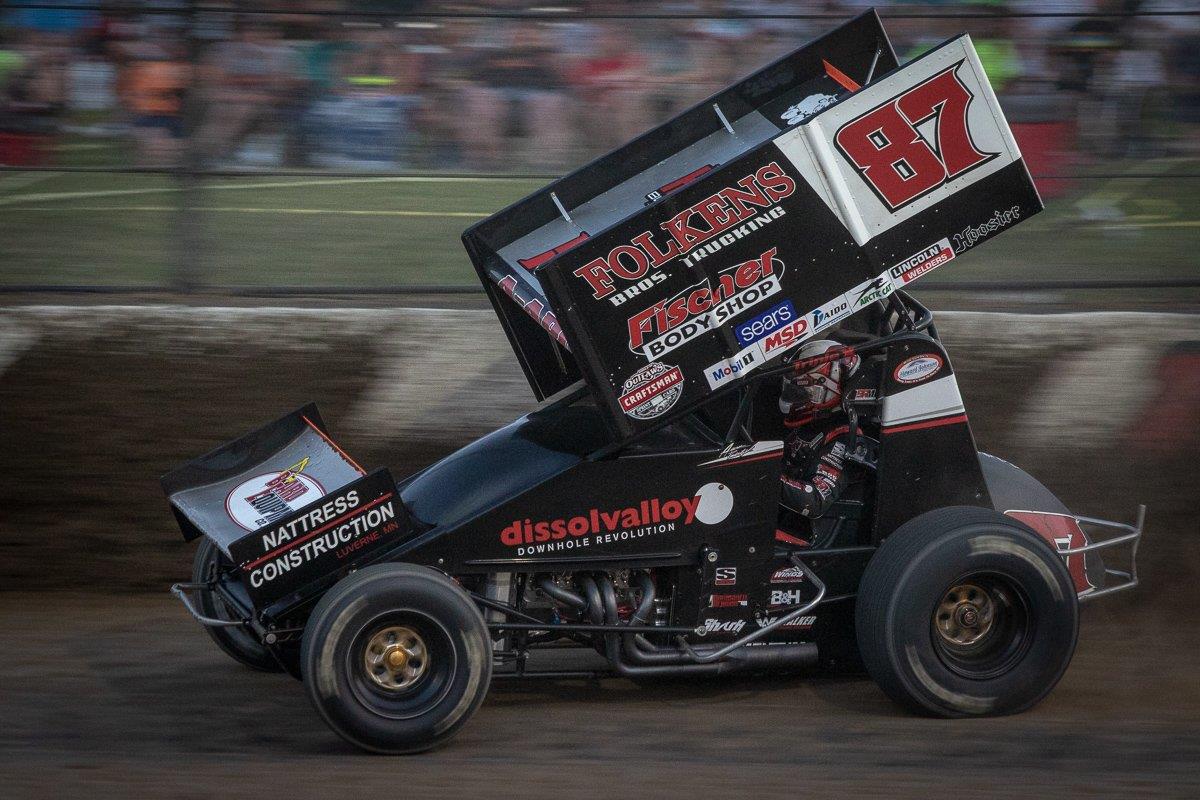 Lonnie Wheatley, CLUTE, Texas (July 20, 2018) – After a week of World of Outlaws competition in the Buckeye State, Aaron Reutzel and the Baughman-Reutzel Motorsports No. 87 Sprint Car team resume the All Star Circuit of Champions title pursuit with a pair of events in Western Pennsylvania this weekend.

This weekend’s double begins at Eriez Speedway in Erie, PA, on Friday night before shifting to Pittsburgh’s PA Motor Speedway in Imperial on Saturday night. It will marks Reutzel’s first appearance at both tracks.

Reutzel enters the weekend sitting a strong third in points, just 26 points off the lead pace with a handful of series wins to his credit including a recent weekend sweep on June 29-30.

Reutzel comes off a WoO week that included his first go at the Doty Classic and then his first Kings Royal Weekend.

Last week’s action began with the Doty Classic at Attica Raceway Park on Tuesday night, July 10, with Reutzel timing in second quick and then winning his heat race. After placing third in the Dash, Reutzel gridded the feature sixth aboard the Folkens Brothers Trucking/Dissolvalloy Downhole Revolution Triple-X Sprint Car.

“We were good all night,” Reutzel recalls. “We got to racing with (Daryn) Pittman, sliding back and forth. I hit the cushion, the car got tight and I went off the track.”

Forced to the tail of the pack, Reutzel soon called it a night. “We weren’t really making any progress after we went to the back, so I just pulled it in to save it for Kings Royal.”

After an eighth place Dash finish, Reutzel finished out the night 15th in the feature.

“We tried something in the feature that we thought might work, but it didn’t at all,” Reutzel explains. “We were way too tight.”

Friday’s Knight before the Kings Royal event started with an uncharacteristic qualifying bobble that put Reutzel just eighth quick among his group.

“I made a mistake in qualifying, but at least we were able to get back up to second in the heat race to get in the Dash,” Reutzel says.

After a third-place Dash run to earn the sixth starting position for the feature, Reutzel added another World of Outlaws top ten finish to the ledger with a finish of tenth.

“We were good, I just never chose the right lines,” Reutzel explains. “We would get up there a couple of spots, then I would make a mistake and give them back.”

With $50,000 on the line for Saturday’s Kings Royal, Reutzel timed in a little too good aboard the Nattress Construction/Momentum Racing Suspensions entry. After stopping the clocks seventh-quickest among the field of 51, Reutzel was set to grid his heat fourth.

“It was the first heat and they had just worked the track, so it was one lane and no passing,” Reutzel relates.

Starting the “B” Main from the pole position, Reutzel jumped out front and had the race well in hand until a failed u-joint two laps shy of the checkered flag brought an early end to his night.

“It’s one of those things that happens,” Reutzel says. “It was a brand new u-joint for Kings Royal, so it shouldn’t have broken. But it did.”

All in all, Reutzel and the BRM No. 87 showed plenty of speed throughout the week. Now, they’ll try to add some All Star wins to the six overall scores thus far in 2018.

Up Next: All Star Circuit of Champions at Eriez Speedway (Erie, PA) on Friday and Pittsburgh’s PA Motor Speedway (Imperial, PA) on Saturday.

If you would like Aaron Reutzel Racing press releases e-mailed directly to you, send your e-mail address to Lonnie Wheatley at lonniewheatley@gmail.com.
Penning the recurring series of “The Wheatley Chronicles” articles on www.sprintcarmania.com, Lonnie Wheatley provides media, public relations and more for select tracks, drivers and events. For more information, Wheatley may be contacted at lonniewheatley@gmail.com.