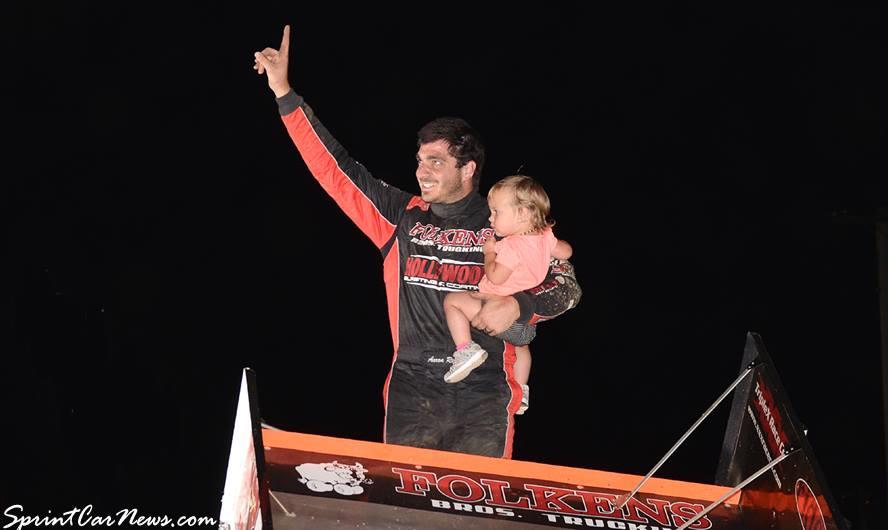 Reutzel Ready for Four More after another All Star Weekend Sweep

Lonnie Wheatley, CLUTE, Texas (July 26, 2018) – Aaron Reutzel and the Baughman-Reutzel Motorsports No. 87 Sprint Car team made the most of first-time visits to a pair of Western Pennsylvania track last weekend by picking up another All Star Circuit of Champions weekend sweep.

Reutzel and the Folkens Brothers Trucking/Dissolvalloy Downhole Revolution Triple-X Sprint Car team stormed into Erie’s Eriez Speedway on Friday night and came away with the victory before moving on to Pittsburgh’s PA Motor Speedway on Saturday night and racking up an eighth overall win on the season.

Closing to within two points of the series points lead, another four events await this week beginning on Thursday at Sun Prairie, Wisconsin’s Angell Park Speedway before moving on to Minnesota’s Jackson Motorplex on Friday, Iowa’s Knoxville Raceway on Saturday and then West Burlington, Iowa’s 34 Raceway on Sunday night.

“It was really slick,” Reutzel says. “It’s kind of what we’ve really been struggling with this year.”

Reutzel and the Nattress Construction/Momentum Racing Suspensions team went to work and found something that they liked.

“We tried some different things and were happy with what we found,” Reutzel recalls.

After winning his heat race, Reutzel raced to a fourth-place finish in the Dash to land the second row outside starting position for the feature. From there, he was soon in pursuit of Cole Duncan for the race lead.

“I was running a little different line than Cole in the beginning,” Reutzel says. “I passed him but then a caution came out. He saw where I was running so he changed his line.”

Looking for another opportunity to recapture the lead, traffic finally played into Reutzel’s hands.

“We were pretty much the same speed, traffic finally worked to my advantage and I snuck by him,” Reutzel said of his sixth All Star Circuit of Champions win of the year.

With action shifting to Pittsburgh’s PA Motor Speedway on Saturday, it was a near perfect night for Reutzel and the BRM No. 87 team with overall quick time in qualifying, a heat race win and then the feature win after a runner-up finish in the Dash.

“It was a big, slick, half-mile,” Reutzel says of the PA Motor Speedway. “It was my kinda joint.”

Reutzel showed that it was to his liking, taking command throughout the evening and ultimately running his All Star win total to seven to go along with an earlier World of Outlaws feature win.

“For the feature, the track was either right on the fence or right on the bottom,” Reutzel comments. “We were able to get the lead at the start and then we got through traffic pretty well, everything really just fell into place.”

Reutzel and crew carry that momentum into this weekend as they look to recapture the top spot in the All Star Circuit of Champions points chase.

Up Next: All Star Circuit of Champions