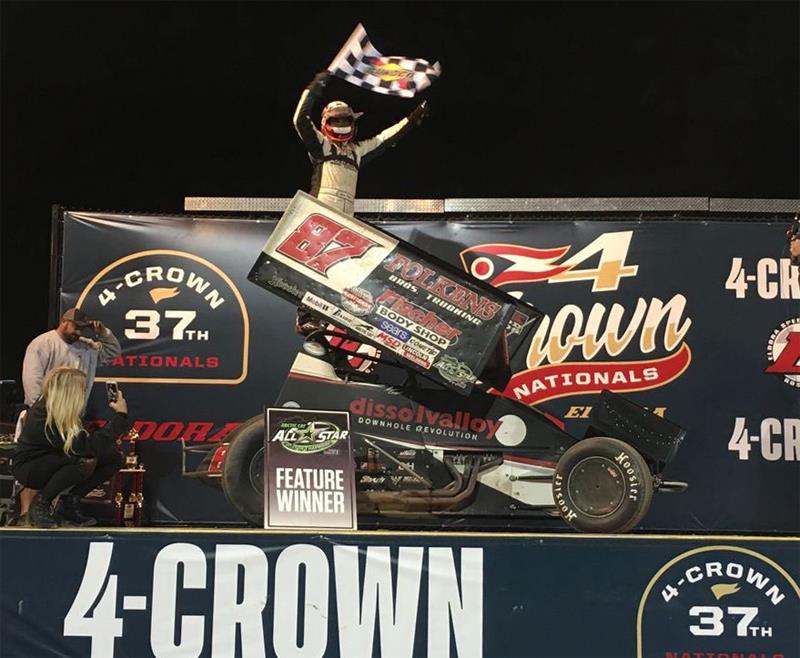 Reutzel One Step Closer to All Star Title after Four Crown Triumph!

Reutzel raced to his ninth series win of the year aboard the Folkens Brothers Trucking/Dissolvalloy Downhole Revolution Triple-X in the 27-lapper to virtually clinch the series driver points championship.

“The whole race played out perfectly for us,” Reutzel said of his 11th overall win of the season.

With the triumph and just the October 6 tilt at Indiana’s Kokomo Speedway remaining on the All Star Circuit of Champions slate, Reutzel simply needs to finish 16th or better to secure the overall team title for the year.

Reutzel kicked off the All Star portion of Saturday’s Four Crown Nationals by timing in second quick and then transferring through heat race action to land a Dash starting berth. From there, he finished fourth to earn the eighth starting position in the feature.

“I didn’t get a good jump at the start of the Dash, but I could tell that we had some good speed,” Reutzel said of Precision Catalyst/Hollywood Blasting & Coating/Beard Equipment entry.

That speed carried over to the feature event with Reutzel needing just a dozen laps to work his way into the lead before checking out on the field to post the victory.

“We got to fourth right away,” Reutzel recalls. “Our car was so good in the middle that I could pick off a car on every restart. There were a lot of cautions early and I picked up a spot on each restart, the race played out just right all the way.”

Reutzel and the Nattress Construction/Momentum Racing Suspensions team opened the weekend with a Friday night World of Outlaws card that preceded the Four Crown Nationals aboard Josh Baughman’s No. 17 entry.

“We were saving our stuff for the All Star points race,” Reutzel explains.

Reutzel raced his way into the feature before making an early exit.

“We tried some stuff that has been working well and some other stuff that we’ve been wanting to try,” Reutzel says. “It was absolutely horrible. We clipped someone and I wasn’t sure what might have been bent, so we just pulled in to play it safe.”

On the cusp of the All Star Circuit of Champions title, Reutzel and the BRM No. 87 team will take this weekend off to fully prepare for the October 6 finale at Kokomo Speedway before finishing out the season with another eight nights of World of Outlaws competition as well as California’s Trophy Cup.

Next Up: All Star Circuit of Champions season finale at Kokomo (IN) Speedway on Saturday, October 6.