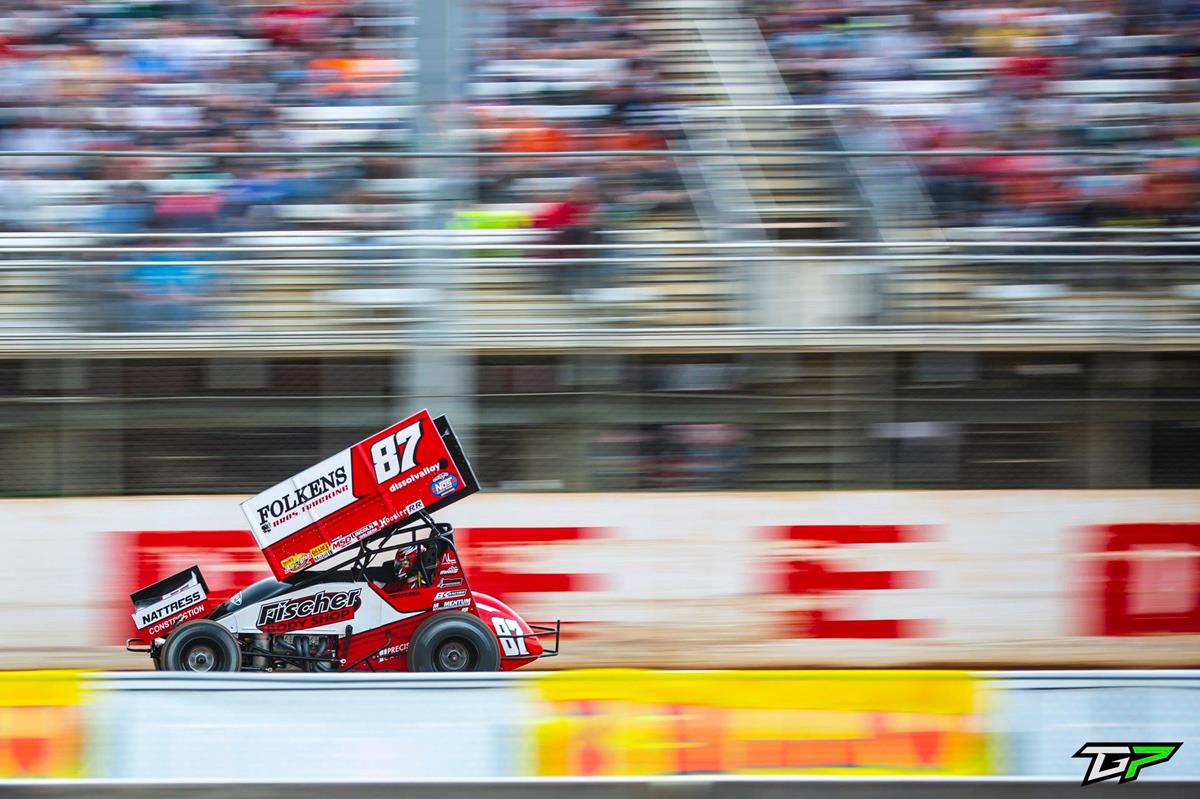 Lonnie Wheatley, CLUTE, Texas (April 19, 2019) – Aaron Reutzel and the Baughman-Reutzel Motorsports No. 87 Sprint Car team opened up their All Star Circuit of Champions title defense in strong form by posting a pair of top-fives in last weekend’s events.

Originally on the way to Attica Raceway Park for another pair of All Star events, inclement Ohio weather has redirected the Folkens Brothers Trucking/Dissolvalloy Downhole Revolution Triple-X team back to Iowa for Saturday night’s season-opening card at Knoxville Raceway before All Star action resumes next weekend in Ohio.

“It’s always good to be able to get in an extra night or two at Knoxville before the Nationals just to see where we’re at with the car and what we need to do to be ready in August,” Reutzel explains.

Last weekend’s originally-slated four-race set got under way at Virginia Motor Speedway with Reutzel timing in second-quickest and needing nothing more than a top-five heat race finish to lock into a Dash. However, engine problems late in the heat race raised the degree of difficulty for the night.

Reutzel and the Precision Catalyst/Hollywood Blasting & Coating/Beard Equipment crew responded though, making repairs and then charging from the 22nd starting position in the feature event to post a top-five finish. And Reutzel felt it could have been better if not for a late skirmish with a lapped car.

“We were really fast and we came right through the field,” Reutzel recalls. “I think we could have been right there in the mix for the win if that lapped car wouldn’t have pulled that stunt.”

Even after the contact, Reutzel recovered and regained a pair of lost positions to open his All Star title defense with a fifth-place finish.

After Friday’s round at Williams Grove Speedway in central Pennsylvania fell victim to rain, action continued on Saturday night at Port Royal Speedway with Reutzel driving the Nattress Construction/Momentum Racing Suspensions entry to another strong finish in fourth.

“We missed it a little bit in qualifying, but it worked out and put on the front row of our heat race,” Reutzel explains.

Reutzel made the most of it, winning his heat race and then scoring a third-place Dash finish to secure the fifth starting position for the 30-lap main event.
Reutzel stayed among the lead pack throughout before ultimately taking the checkered flag in fourth.

“We couldn’t quite get off the corners that we needed to in the feature,” Reutzel says. “That really kept us from being able to contend more for the win, but at least we were able to get away with a good finish.”

Following another rainout on Sunday at Bedford Speedway, Reutzel and company left the opening weekend of All Star Circuit of Champions points action a close second in points.

Now the team looks to get dialed in at Knoxville Raceway on Saturday night.

Next Up: Knoxville Raceway on Saturday night. Those unable to attend in person can call all the action live via PPV at www.dirtvision.com.