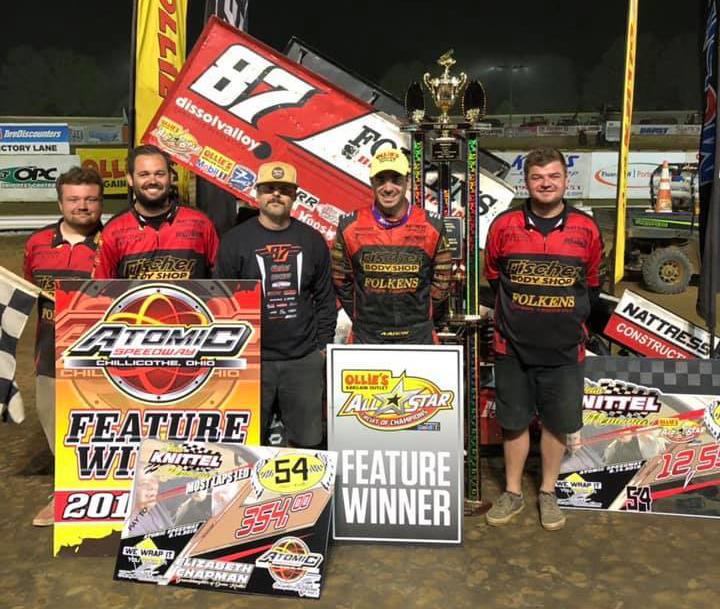 Reutzel and the Folkens Brothers Trucking/Dissolvalloy Downhole Revolution Triple-X team made it at least one win in each of the five weekends since a top-five finish at the Knoxville Nationals with a $12,554 triumph at Atomic Speedway’s Dean Knittel Memorial finale on Saturday night.

The triumph ran Reutzel’s season win total to 15 and pushed his All Star Circuit of Champions points lead to 54 markers with just four nights of series competition remaining.

Three of those nights take place this weekend, beginning with Friday night’s Tommy Hinnershitz Memorial at central Pennsylvania’s Williams Grove Speedway before moving on to Lincoln Speedway on Saturday and then Maryland’s Hagerstown Speedway on Sunday.

This weekend’s triple wraps up a string of big money weekends in All Star Circuit of Champions competition with as much $30,000 up for grabs including a $20,000 winner’s share in Saturday’s Dirt Classic at Lincoln Speedway.

Last weekend’s three-race set at Chillicothe’s Atomic Speedway opened with Reutzel posting finishes of fifth and fourth on Thursday and Friday before climbing to the top rung of the ladder in Saturday’s big-money finale aboard the Precision Catalyst/Hollywood Blasting & Coating/Beard Equipment machine.

Reutzel began each of the three nights in identical fashion by establishing the night’s quickest time in qualifying. It ran his number of quick times on the season to an astounding total of 20.

“Some of it is our cars and some of it is just the pill draw,” Reutzel said of his penchant for timing in quickest on the night.

In the Thursday night feature, Reutzel entered the mix for the lead and then settled for fifth in the Nattress Construction/Momentum Racing Suspensions entry after contact with the wall.

“We were a little off in the feature, but I still thought we had a car to win,” Reutzel explains. “But I smacked the fence and knocked the ladder off so I just hung on for fifth.”

On Friday, Reutzel improved a position to finish fourth.

“We missed it in the feature, but we were starting up front and I thought I might be able to hold them off with the track conditions,” Reutzel says. “But I hit a rut and bounced off the track and we just rode in fourth the rest of the way.”

Reutzel and the BRM No. 87 saved the best of the weekend for last, leading all 30 laps of the feature to pocket the $12,554 winner’s share.

“We finally put the whole thing together between the car and the driver,” Reutzel says. “The car was flawless all night.”

Reutzel and crew will try to keep that momentum going with this weekend’s set of events in central Pennsylvania and Maryland.

Next Up: All Star Circuit of Champions at Williams Grove Speedway (Mechanicsburg, PA) on Friday, Lincoln Speedway (Abbottstown, PA) on Saturday and Hagerstown (MD) Speedway on Sunday. Those unable to take in the action in person can watch it all live on PPV at https://www.speedshifttv.com/.