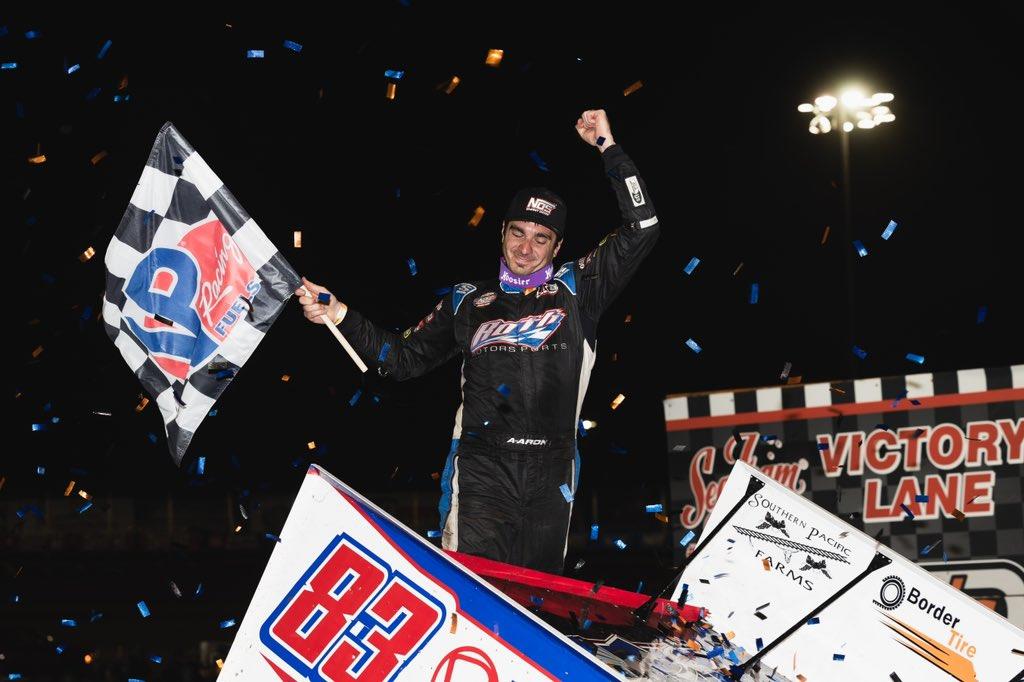 The team’s third World of Outlaws win of the season and fourth overall was worth $30,000 to the series leading Rookie of the Year contender.

The beat goes on this week with Reutzel and crew looking to add more to the coffers at this weekend’s “Independence Day Spectacular” at New Richmond, Wisconsin’s Cedar Lake Speedway on Friday and Saturday.

After getting sidelined in the Monday night Huset’s 50 preliminary event, Reutzel bounced back strong on Tuesday night by timing in second-quickest among his flight of qualifying and then winning his heat and the Dash to earn the pole position for the feature event.

“I’m so pumped,” Reutzel remarked after his wing dance. “It’s been a trying year for us. We’d find speed, then we’d lose it, then we’d find something again, then it’d quit working. We haven’t given up, though. I felt like we were pretty good, I mean we didn’t make any real changes all night and that normally makes me nervous because I like to change a lot.”

The victory put Reutzel and team in place for a $100,000 bonus if they pulled off a Jackson Nationals victory as well over the weekend.

But a bad pill draw that had Reutzel as the last car to qualify in the Thursday opener put the team behind an eight ball from which they could not emerge, ultimately finishing out the three-day tilt in Minnesota 15th in the Saturday night finale.

It’s more new territory for Reutzel this weekend as he gets his first taste of Wisconsin’s Cedar Lake Speedway.

Next Up: World of Outlaws Sprint Cars at Cedar Lakes Speedway (New Richmond, WI) on Friday and Saturday. Those unable to attend can watch all the action live on www.dirtvision.com.

Keep Track: Keep track of Aaron Reutzel’s on-track action including schedule and results at http://www.aaronreutzelracing.com/ and on Facebook at https://www.facebook.com/pages/Aaron-Reutzel-Racing/117666254913127. You can also e-mail Aaron at aaronreutzel@yahoo.com