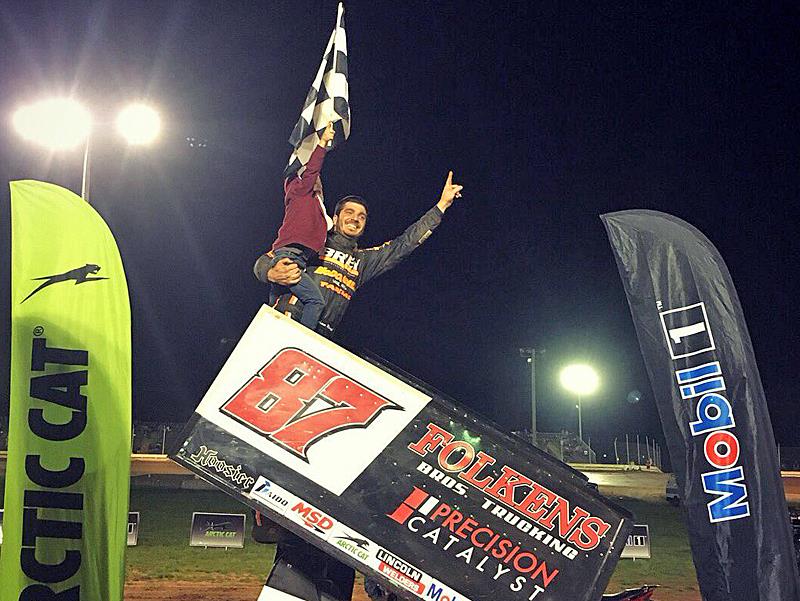 Lonnie Wheatley, CLUTE, Texas (May 11, 2018) – Aaron Reutzel had already picked up his first career World of Outlaws feature win to get the season under way.

It didn’t take much longer for Reutzel and Baughman-Reutzel Motorsports No. 87 Sprint Car team to snare a first career All Star Circuit of Champions feature win with a triumph in last Saturday night’s 30-lap feature at Hartford, Ohio’s Sharon Speedway.

Following a Friday night rainout at Lernerville Speedway, the Saturday score put Reutzel atop the All Star championship point charts.

“It’s nice to get these first wins out of the way early,” Reutzel says. “That way I don’t have to think about that any more when we get to the track.”

With the All Stars idle this weekend, Reutzel will take in three nights of World of Outlaws competition including both nights of the WoO portion of Eldora Speedway’s #letsracetwo event on Friday and Saturday before moving on to Haubstadt, Indiana’s Tri-State Speedway on Sunday night.

While last Saturday resulted in Reutzel’s second win of the year, the evening started in uncharacteristic fashion for the driver of the Folkens Brothers Tucking/Dissolvalloy Downhole Revolution Triple-X Sprint Car.

“The night started out different,” Reutzel recalls. “We usually start out fast, but we weren’t very good in hot laps and didn’t time all that well.”

In this case though, qualifying third among his group worked to the advantage of the Precision Catalyst/Hollywood Blasting & Coating/Beard Equipment team.

“It put us on the front row of the heat and we were able to stay there,” Reutzel says. “Then Carson drew us the pole of the Dash.”

Reutzel took full advantage of his young son’s fortuitous draw despite a lack of brakes, winning the Dash to earn the pole position for the feature aboard the Nattress Construction/Momentum Racing Suspensions machine.

“We were almost late for the Dash, I got in the car and had no brakes,” Reutzel explains. “There was a hole in a line. Since we started up front we were able to hold on and then get it fixed for the feature.”

Reutzel went on to lead all 30 laps of the feature, though he had to move around throughout the race to secure the $5,000 winner’s share and All Star points lead.

“I jumped out early and was rolling the bottom, but I could feel myself getting slower,” Reutzel says. “Just as I was thinking about moving up the track, I could hear someone out there. A caution came out then and I knew I had to jump up there to the top.”

The top didn’t last for the duration though.

“It only lasted about ten laps, then I moved to the middle of the track to finish it,” Reutzel explains of the winning laps.

“It feels really good to have some speed on these slow and slick tracks,” Reutzel says of the progression of the BRM No. 87 Sprint Car.

This weekend Reutzel makes a return to Eldora Speedway, where he picked up a 360-ci win in his only previous visit in 2016. Sunday’s card will also mark his second start at Tri-State Speedway.

Up Next: World of Outlaws Sprint Car at Eldora Speedway (Rossburg, OH) on Friday and Saturday and then Tri-State Speedway (Haubstadt, IN) on Sunday.
Those unable to catch the action in person can watch live via PPV on www.dirtvision.com.

If you would like Aaron Reutzel Racing press releases e-mailed directly to you, send your e-mail address to Lonnie Wheatley at lonniewheatley@gmail.com.
Penning the recurring series of “The Wheatley Chronicles” articles on www.sprintcarmania.com, Lonnie Wheatley provides media, public relations and more for select tracks, drivers and events. For more information, Wheatley may be contacted at lonniewheatley@gmail.com.