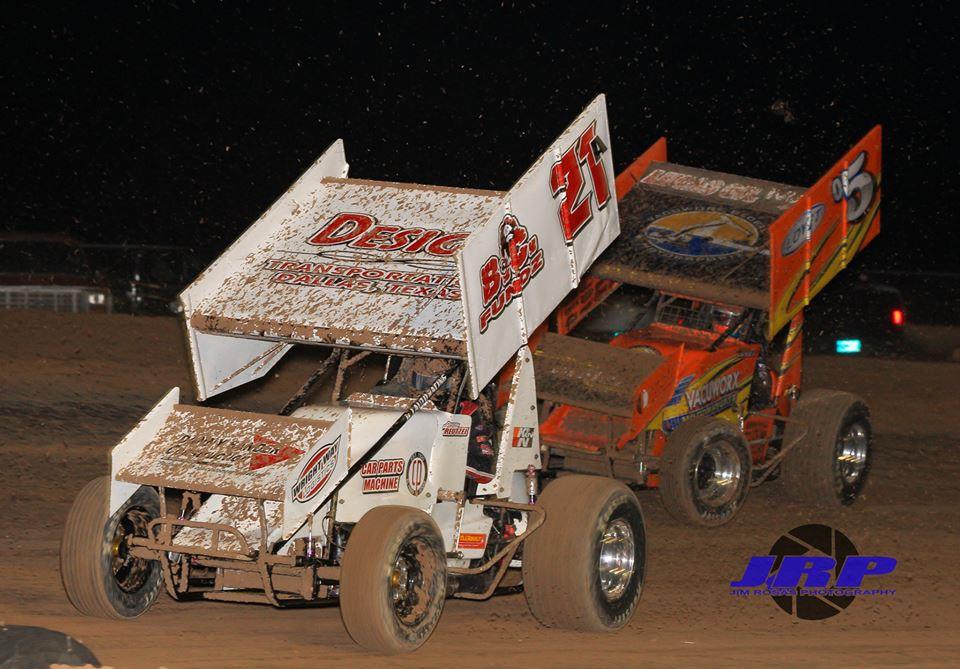 PETERSEN MEDIA: Climbing aboard the Bob and Christie Miller owned machine with a hurt tailbone over the weekend, Aaron Reutzel seemed to be un phased, as he showed speed at both the El Paso Speedway Park and the Southern New Mexico Speedway.

Hitting the El Paso Speedway Park in El Paso, TX on Friday night, Reutzel drew high in the heat race draw, and lined the No.21A machine up in the fourth row.

Fighting from seventh to fifth on a bit of a narrow track, Reutzel snuck into the feature as he sat 15th in points, putting him in the eighth row.

As laps continued to be ran on the track, it widened up very nicely for the feature event, and Reutzel was able to put on a great charge.

Searching all over the speedway, Reutzel was able to make passes happen at near will as he got up inside the top five.

Once into fifth, Reutzel challenged Matt Covington a little for the fourth spot, but was unable to make anything happen, and took a fifth place finish with him to the Southern New Mexico Speedway in Las Cruces, NM.

Pulling a much lower pill on Saturday for his heat race, Reutzel started in the third spot, and scored a second place finish, putting him in the top-eight redraw for the feature event.

Pulling the three, Reutzel lined up in the second row for the feature event, and when the green flag dropped, he dove used the bottom of the speedway to his advantage, and took the lead out of turn two, but the caution waived negating his progress, and restarting the race.

Showing his hand on the first start, the race into turn one was to the bottom of the track this time, and as cars checked up to test the bottom themselves in front of Reutzel, he got sideways, and then got hit, and his night was over before completing a lap.

“It was a decent weekend,” Reutzel said. “We were plenty fast both nights, but I knew you run the bottom a little harder then a few other guys did on Saturday and I got in a little to hot, and that was the end of it. I have to thank the Miller’s, and hopefully we can run well again at Cocopah Speedway this weekend.”

Aaron would like to thank Wren Motorsports, ButlerBuilt, Simpson, BC Funds, and Triple X for their support during the 2013 season.

ON TAP: Aaron will continue to run with Bob and Christie Miller this weekend at the Cocopah Speedway.

STAY CONNECTED: Stay updated with Aaron by following him on Twitter @AaronReutzel or visiting his website at www.aaronreutzelracing.com.

PETERSEN MEDIA: Petersen Media is a promotional agency that can handle your public relations, marketing, and any other promotional needs. Petersen Media utilizes multiple tactics to help you reach your intended audience, to boost awareness.