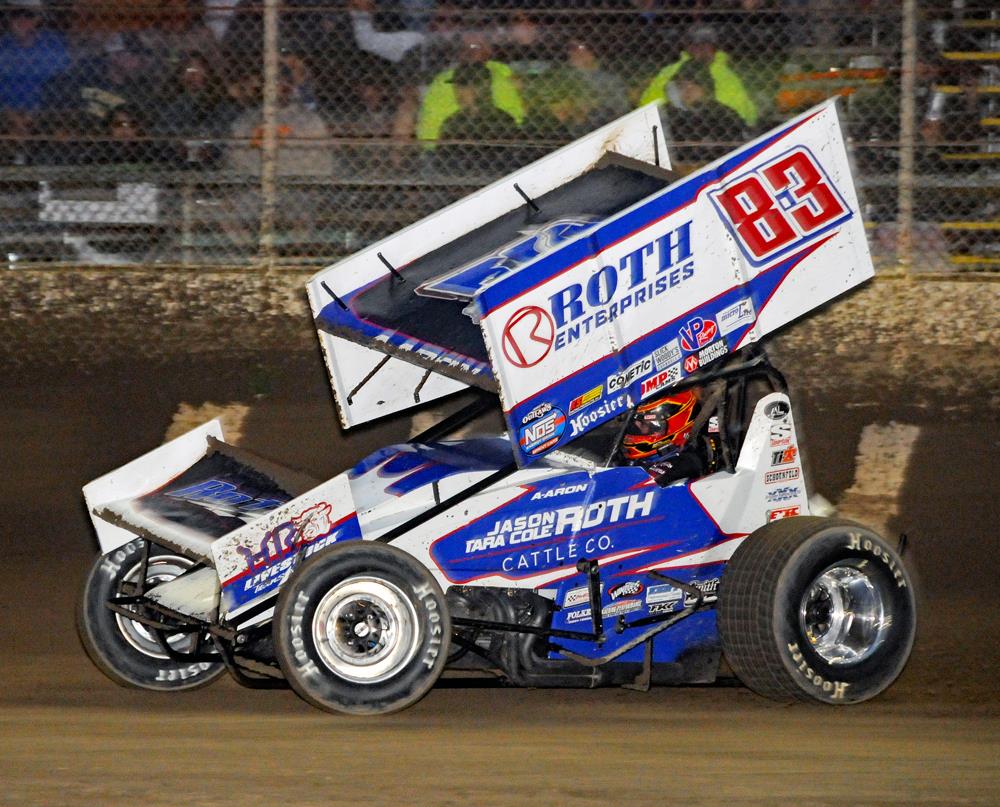 Big Ohio Week ahead for Reutzel after Pair of Wisconsin Top-Fives!

Lonnie Wheatley, CLUTE, Texas (July 13, 2021) – From the Badger State to Buckeye, a potentially lucrative week of racing in Ohio lies ahead for Aaron Reutzel and the Roth Motorsports No. 83 Sprint Car team.

Five consecutive nights of World of Outlaws competition in Ohio begins at Attica Raceway Park with Tuesday night’s “Brad Doty Classic”. From there, the action shifts to Eldora Speedway for the 38th Kings Royal on Wednesday and Thursday and then a makeup of last year’s 37th Kings Royal on Friday and Saturday. The Thursday and Saturday feature events both offer up a $175,000 winner’s share.

Reutzel and crew race into Ohio on a high note after picking off a pair of top-fives in three Wisconsin races over the past two weekends. And it would have been three-for-three if not for a faulty nose wing mount in the other feature event.

The three-race swing through Wisconsin began with the “Independence Day Spectacular” at New Richmond’s Cedar Lake Speedway on Friday and Saturday, July 2 and 3.

Reutzel found the Cedar Lake Speedway oval to his liking in his first visit, timing in third-quickest among his group and then winning his heat race en route to starting fifth in the feature event.

The Clute, TX, native raced on to a podium finish aboard the potent No. 83 machine.

“We were pretty decent all night, the curb went to the fence and that’s usually when I’m okay,” Reutzel says. “We made the right adjustments all night to stay with the track. I wish I would have gotten to the wing a little quicker, I wasted about ten laps. But when I got to it, I thought we were right there with those guys.”

It looked to be more of the same the following night with another strong qualifying effort of second and another heat race win before securing the front row outside starting position for the feature. Reutzel battled among the lead pack for the opening half of the 35-lapper until a faulty nose-wing brace created an ill-handling machine that Reutzel wrestled to a 13th-place finish on the night.

Staying in Wisconsin for this past Saturday’s “Badger 40”, Reutzel clocked in fourth and landed another Dash position with a runner-up finish in heat race action.

After starting the feature in fourth, Reutzel again raced amongst the lead handful of cars throughout the 40-lapper before finishing out the night with a strong fifth-place finish.

Reutzel has found his way to victory lane in past efforts at both of the tracks on the docket for this week.

He raced to a pair of Attica wins en route to his second of three All Star Circuit of Champions titles in 2019 and finished off both the 2018 and 2019 All Star championship campaigns with triumphs in the Eldora finale.

Most recently, Reutzel finished on the Attica podium a pair of times last year and also raced to his second career World of Outlaws Eldora runner-up finish earlier this season.

Next Up: World of Outlaws Sprint Cars at Attica Raceway Park on Tuesday and Eldora Speedway on Wednesday through Saturday. Those unable to attend can watch all the action live on www.dirtvision.com.